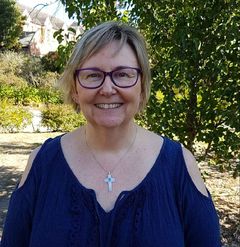 ​Rev Denise Nicholls - Vicar
Denise has been our vicar since February 2018, though she has been in ministry for over 20 years. She originally hails from Sydney, where she worked as a school teacher. After moving to Melbourne in 2007, Denise worked for many years in school chaplaincy. Denise enjoys to getting to know people, and appreciates having many conversations as part of her role as vicar. Denise loves to travel, drink coffee, and pet dogs.

Rev Jonathan Lopez - Associate Priest
Jonathan was ordained priest in 2017. He grew up in the western suburbs of Melbourne. Jonathan has church experiences in Roman Catholic, Pentecostal and Salvation Army as a youth and young adults leader and high school chaplain. He is also a boxing coach and coaches at an Indigenous club. Jonathan enjoys keeping fit and the art of BBQ.
​​
Proudly powered by Weebly